The Euro Souvenir in the News

We collect online and offline news reports and articles from national and international news about the Euro Souvenir. The rich variety of reports especially in the international news gives evidence of the fast-growing popularity and excitement about this innovative souvenir product. 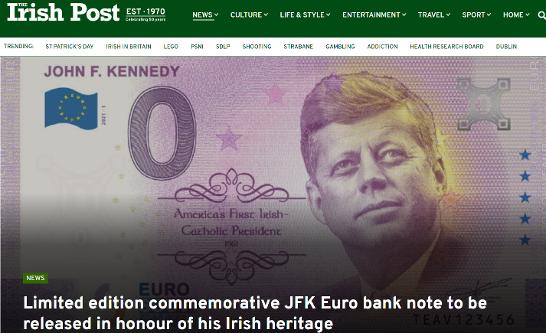 A LIMITED EDITION Euro bank note has been commissioned in honour of former US President John F. Kennedy.

Euro Note Souvenir announced last month that 10,000 of the notes would be printed to pay homage to Kennedy’s Irish roots, 60 years after his inauguration.

Each note will feature a picture of President Kennedy, with the words 'America's first Irish-Catholic President' written underneath. Read More 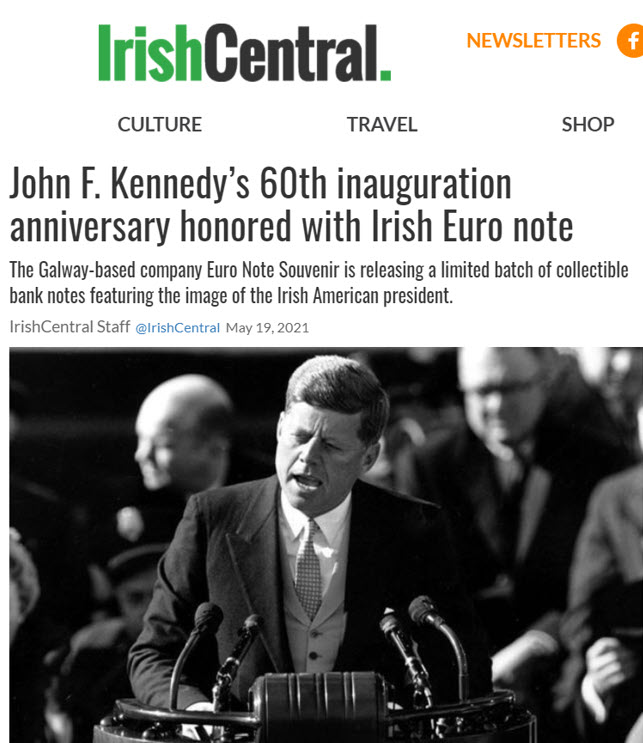 President John F Kennedy is being honored with a collectible Euro commemorating the 60th anniversary of his inauguration.

The Galway-based company Euro Note Souvenir is releasing a limited batch of 10,000 bank notes featuring the image of the Irish American president.

The 0 Euro souvenir banknotes are printed by by Oberthur Fiduciaire, one of the official printing houses for the European Central Bank (ECB), located in France. Read More 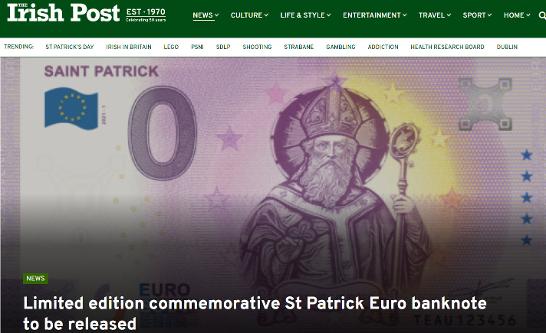 A EURO BANKNOTE depicting St Patrick is set to be released just in time for St Patrick's Day.

Each note will feature a picture of St Patrick on the front of the bill, holding his staff in one hand and a shamrock in the other, raised in a gesture of blessing. Read More 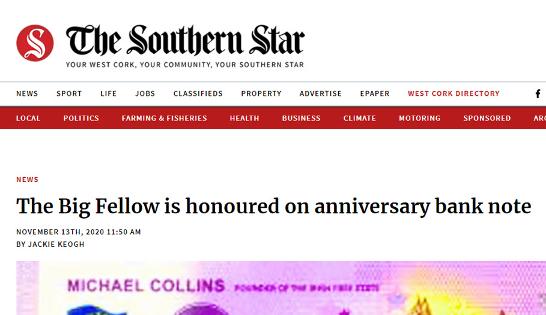 A ‘zero-euro’ bank note commemorating the 98th anniversary of the death of Michael Collins is now available for collectors to buy, writes Jackie Keogh.

THE 98th anniversary of the death of one of West Cork’s most celebrated heroes, Michael Collins, has been marked with a commemorative bank note.

Only 5,000 of the zero-euro notes have been created by the Euro Note Souvenir company, which is based in Headford, Co Galway. Read More 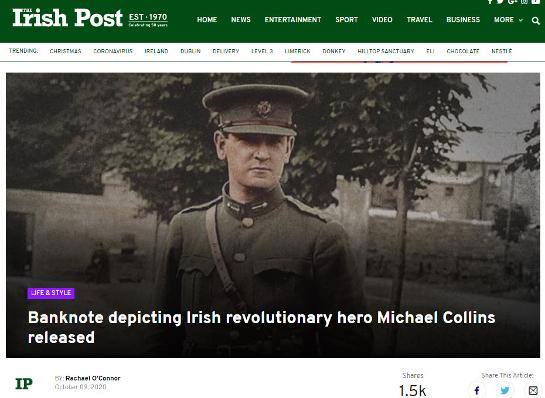 ONE OF Ireland's greatest heroes has been immortalised in a limited edition banknote, released to commemorate 98 years since his death at Béal na Bláth.
Irish revolutionary Michael Collins died on 22 August, 1922, but his legacy remains as strong as ever, with many Irish people considering a personal hero and martyr for the cause of Irish independence.
Now, 98 years after his assassination during the Irish Civil War, banknotes have been created to commemorate the achievements of his short life.
The '0 euro' note looks and feels like any other euro note, including a watermark, holographic protection and UV-responsive tactile marks, but features an image of the 'big fellow' himself in the military uniform of the National Army. Read More 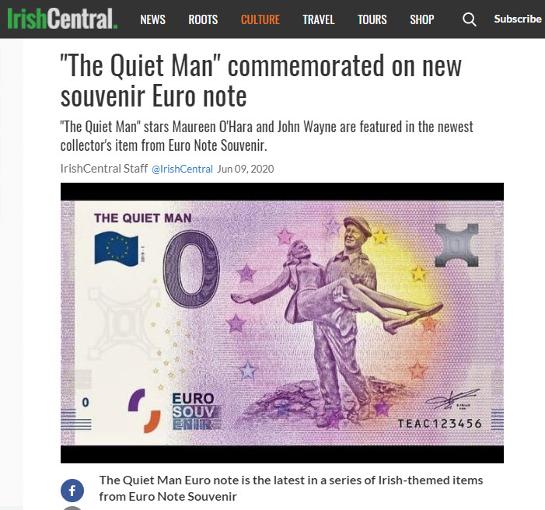 "The Quiet Man" stars Maureen O'Hara and John Wayne are featured in the newest collector's item from Euro Note Souvenir.

“The Quiet Man,” the beloved 1952 film which helped forever shape the world’s view of Ireland, is being memorialized in a new €0 note released by Euro Note Souvenir.

The iconic image of John Wayne as Sean Thornton scooping up Maureen O'Hara as MaryKate Danaher is featured on the front of the collector's item, the newest in a series of Irish-themed collectibles from Euro Note Souvenir. Read More 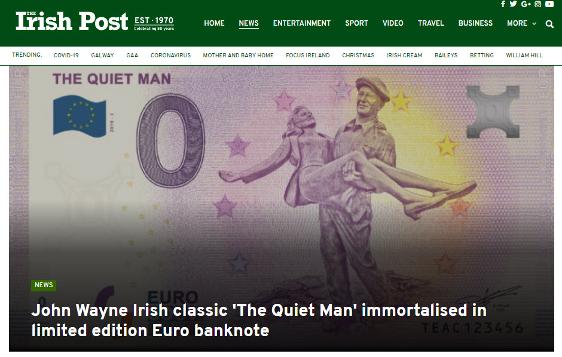 ALMOST 70 years after first wowing audiences with its romantic portrait of Ireland the classic John Wayne film The Quiet Man has been immortalised as part of a special limited edition “0 euro note.”

The work of Euro Note Souvenir , the special note has been officially licensed by the European Central Bank and printed by Oberthur, the French facility that prints the euro.
It has the look and feel of a euro, along with a watermark, holographic protection and UV-responsive tactile marks. On the front, the iconic image of John Wayne scooping up Maureen O’Hara can be clearly seen. Only 5,000 copies of the note will be produced. Read More

AFV NEWS - “The Titanic” is Getting a Sequel 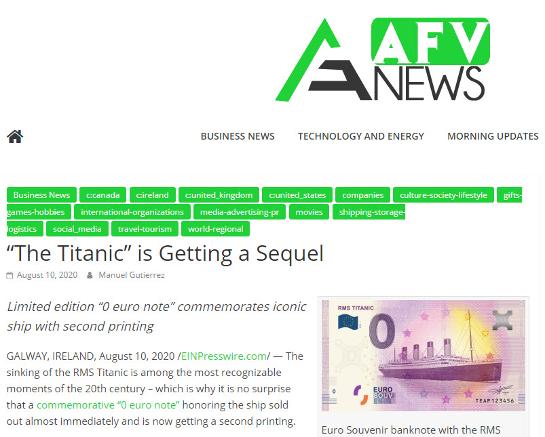 GALWAY, IRELAND, August 10, 2020. The sinking of the RMS Titanic is among the most recognizable moments of the 20th century – which is why it is no surprise that a commemorative “0 euro note” honoring the ship sold out almost immediately and is now getting a second printing.

Euro Note Souvenir created the first issuance of the note back in March. The note has been officially licensed by the European Central Bank and printed by Oberthur, the French facility that prints the euro. It has the look and feel of a euro, along with a watermark, holographic protection and UV-responsive tactile marks. On the front, the familiar image of the proud RMS Titanic at sea can be clearly seen. The first run of the note quickly sold its 5,000 copies, and so a second edition of 5,000 notes is being released. Read More 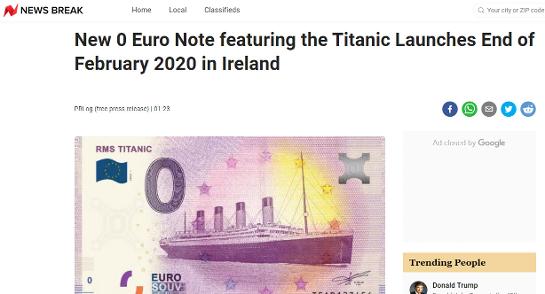 Galway company to support Ireland's heritage and history with its Irish 0 Euro notes.

Ireland's only Euro Souvenir supplier, Euro Note Souvenir Ltd, proudly announce the release of the new Euro Souvenir Banknote with the image of the iconic RMS Titanic ship by the end of February 2020. The new 0 Euro Banknote is designed to honor the Titanic, which sank in 1912 after striking an iceberg, as an important part of Irish history. Read More

INDEPENDENT.IE - Local heroes: Entrepreneur out to cash in on demand for souvenir euro note

It may not be an actual licence to print money, but one Galway-based firm is banking on the astonishing popularity across Europe of the 'zero-euro' note.
The zero-euro is an souvenir banknote authorised by the European Central Bank and printed by Oberthur, a facility in France that also prints the real euro banknotes.
Like a traditional banknote, it has a watermark, holographic protection and tactile marks that are visible under UV-light. As well as looking and feeling like the real thing, it can be personalised with a picture of any visitor attraction, event or building. Euro Note Souvenir owns the exclusive Irish licence for the zero-euro banknote and is currently in the throes of rolling out a service whereby visitor attractions here can purchase banknotes with their own attraction or motif displayed, and market them to their visitors on-site via an ATM-like machine, or online. Read More 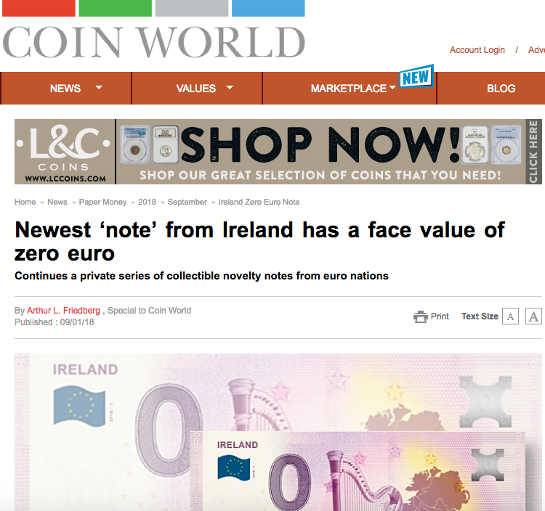 Ireland is the ninth country to have a bank note issued in its name with a face value of zero euros. The note was released by a company in Galway called Euro Note Souvenir.

Its face has a picture of a Celtic harp and a map of Ireland showing its counties. It was printed by Oberthur Fiduciaire in Switzerland, an official Euro bank note printer, and is made of 100 percent cotton paper. It features a standard watermark, hologram, microprinting, security thread, and symbols that appear only under UV light, as on legal tender euro notes.

The issuing company says the €0 concept already exists in France, Germany, Austria, Belgium, Italy, Spain, Greece and Portugal. The faux paper money is made with the approval of the European Central Bank. 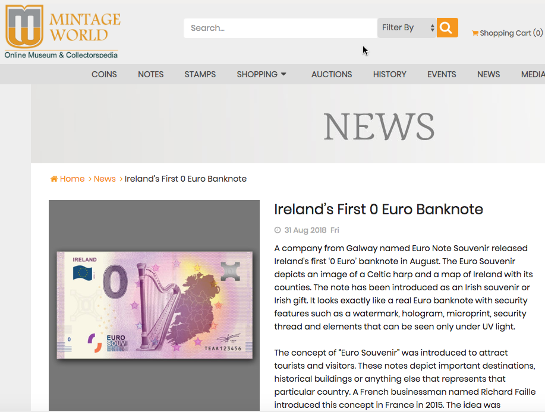 A company from Galway named Euro Note Souvenir released Ireland’s first ‘0 Euro’ banknote in August. The Euro Souvenir depicts an image of a Celtic harp and a map of Ireland with its counties. The note has been introduced as an Irish souvenir or Irish gift. It looks exactly like a real Euro banknote with security features such as a watermark, hologram, microprint, security thread and elements that can be seen only under UV light.

The concept of “Euro Souvenir” was introduced to attract tourists and visitors. These notes depict important destinations, historical buildings or anything else that represents that particular country. A French businessman named Richard Faille introduced this concept in France in 2015. The idea was expanded and has now reached Germany, Austria, France, Belgium, Italy Switzerland, Spain and Portugal through various businesses. Read More 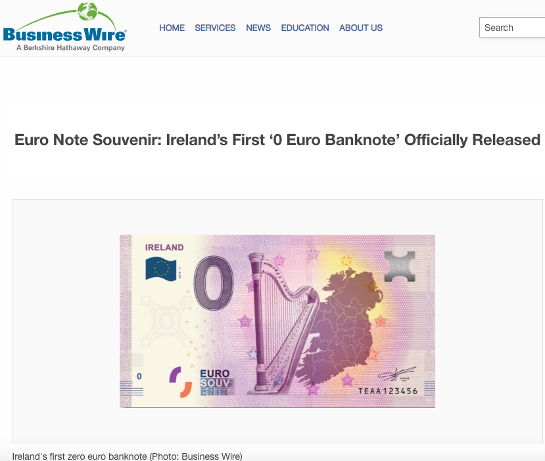 HEADFORD, Ireland--(BUSINESS WIRE)--Euro Note Souvenir, a Galway based company, has launched the first ‘0 Euro’ banknote for Ireland this month. The banknote, also referred to as Euro Souvenir, shows the picture of a Celtic harp and a map of Ireland and its counties, and marks the beginning of the introduction of the Euro Souvenir concept in Ireland as an Irish souvenir or Irish gift.

The Euro Souvenir note looks and feels like a real Euro banknote, and with the Celtic harp and the map of Ireland, one could think of it as an official Irish banknote. The note carries even security features such as watermark, hologram, microprint, security thread and the symbols that appear only under UV light. Read More

Reports about the 0 Euro banknotes in international media

Because the first batch of 5000 copies was already completely out of stock overnight, Kiel Marketing has now started a new edition. "Now we have 30,000 reordered souvenir banknotes, 16,000 of which have been pre-ordered again," says organiser Eva-Maria Zeiske.

They are now going on sale in Kiel and beyond. But not only in Germany. Orders have arrived in Kiel from France, Italy, England, Spain and even South America. How can one explain the great excitement around the zero euro note?

This Euro Souvenir note became the best-selling souvenir in France in less than three years:

What attracts the crowds here? Shortly after opening the doors, a queue has formed at the Tourist Information. This is probably also due to the limited, Hercules-themed zero Euro souvenir note, which enjoys great popularity. Hercules is celebrating his 300th birthday this year. The Museumslandschaft Hessen Kassel and Kassel City Marketing are honouring this event with a collector's item: a limited Hercules souvenir bank note.

The alpine zoo wants to finance a new enclosure for dwarf mice and sells it for 2 euros. Collectors like to spend more on it. The zero-euro notes are already much sought-after and highly popular among collectors.

Tourists, collectors, children and also the shop manager enjoy the Euro souvenir note. In this TV news report you can see the Euro Souvenir vending machine.

Souvenir shops diversify their products nowadays and offer a more modern assortment. A personalized, real souvenir banknote: A high quality souvenir note shows a picture of a tourist attraction.  Today, every visitor can buy a souvenir Euro note for 2 euros. This small bill has no financial value, but a sentimental value for the tourists. 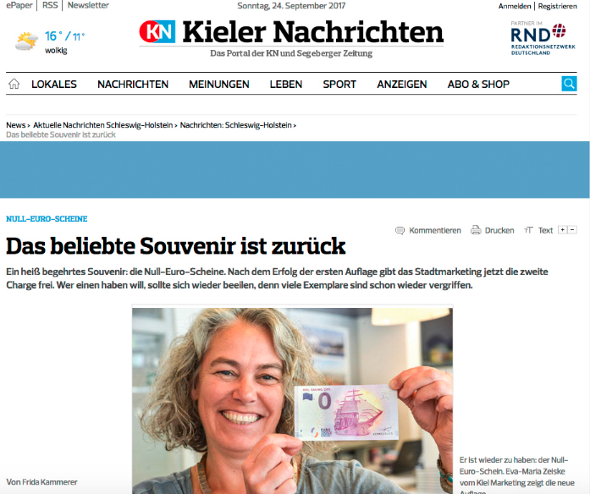 Zero Euro Notes: The popular souvenir is back

A more than popular souvenir: the zero euro bank notes. After the success of the first issue, the city marketing has released the second issue. Whoever wants to get one of those souvenir notes should be quick, because a lot of them have already been sold. 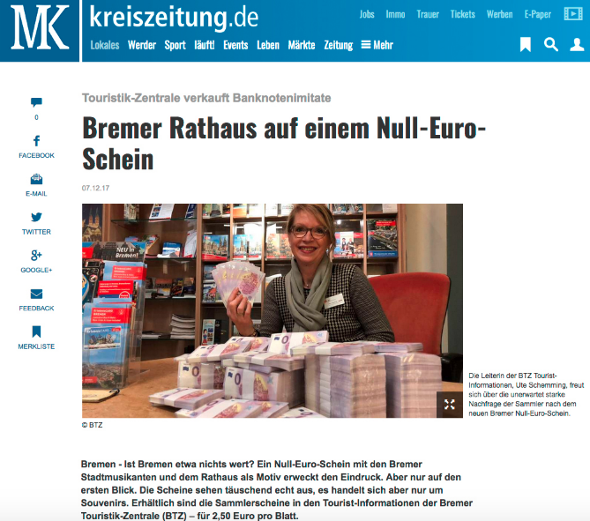 Isn't Bremen worth anything? A zero euro note with the Bremen Town Musicians and the Town Hall as motive gives the impression. But only at first glance. The zero euro bank notes look deceptively real, but they are only souvenirs. These collector's items are available at the tourist information offices of the Bremer Touristik-Zentrale (BTZ) - for 2.50 euros per sheet. 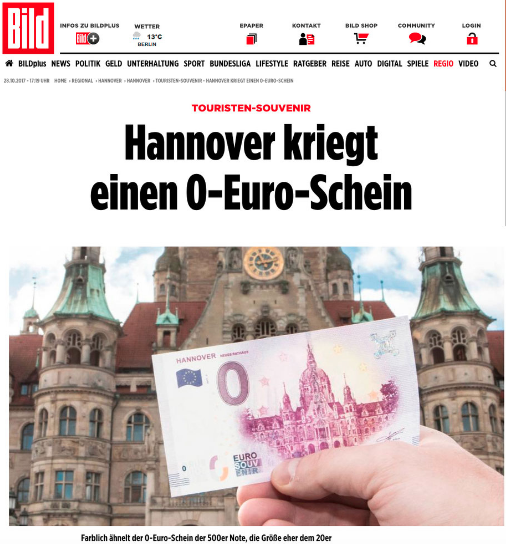 HANNOVER GETS ITS OWN 0 EURO NOTE

THERE IS PLENTY OF NEWS COVERAGE AND HUNDREDS OF PRESS REPORTS AVAILABLE FROM FRANCE AND GERMANY AND THOSE COUNTRIES WHERE THE ZERO EURO SOUVENIR NOTE IS AVAILABLE.

WE WORK HARD TO GET THE COVERAGE IN IRISH NEWS, TOO AND WILL LINK ANY REPORT IN THIS SECTION.