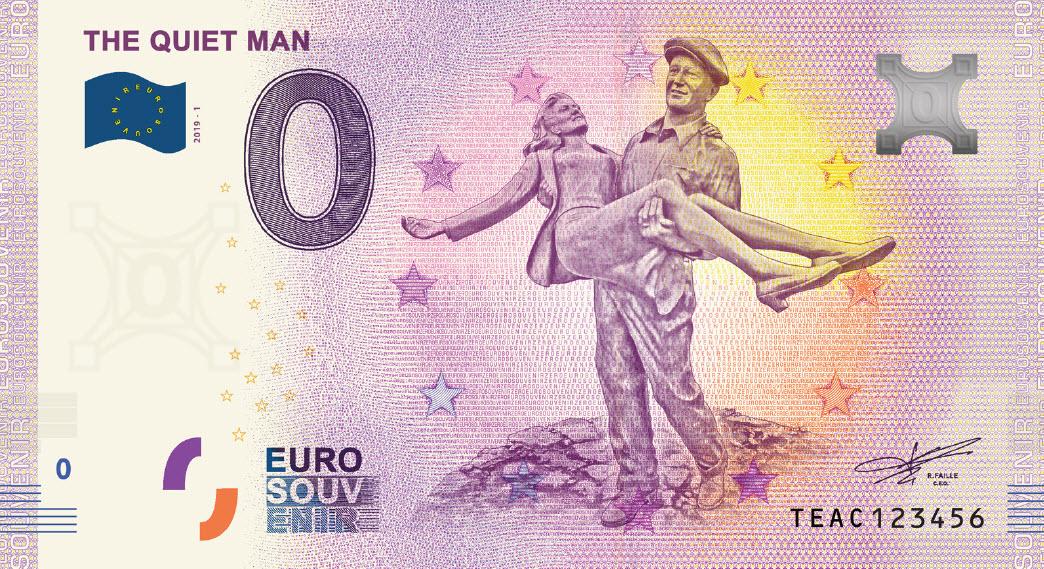 A collector's 0 Euro Banknote dedicated to The Quiet Man

In a few week's time, around mid april, a new Irish 0 Euro Banknote will be released that shows the statue of The Quiet Man in Cong, Co. Mayo, where the popular movie with John Wayne and Maureen O'Hara was shot.

The Quiet Man is a 1952 Technicolor American romantic comedy-drama film directed by John Ford. It stars John Wayne, Maureen O'Hara, Barry Fitzgerald, Ward Bond and Victor McLaglen. The screenplay by Frank S. Nugent was based on a 1933 Saturday Evening Post short story of the same name by Maurice Walsh, later published as part of a collection titled The Green Rushes. The film is notable for Winton Hoch's lush photography of the Irish countryside and a long, climactic, semi-comic fist fight. It was an official selection of the 1952 Venice Film Festival.

The story is set in the fictional community of Inisfree. This is not the same as the Lake Isle of Innisfree, a place in Lough Gill on the Sligo–Leitrim border made famous by poet William Butler Yeats, which is a tiny island. Many scenes for the film were actually shot in and around the village of Cong, County Mayo, on the grounds of Cong's Ashford Castle. Cong is now a wealthy small town and the castle a 5-star luxury hotel. The connections with the film have led to the area becoming a tourist attraction. In 2008, a pub opened in the building used as the pub in the film (it had actually been a shop at the time when the movie was shot); the pub hosts daily re-runs of the film on DVD. The Quiet Man Fan Club holds its annual general meeting in Ashford Castle. Other locations in the film include Thoor Ballylee, Co. Galway, home of poet W.B. Yeats for a period, Ballyglunin railway station near Tuam Co. Galway, which was filmed as Castletown station, and various places in Connemara Co. Galway and Co. Mayo. Among those are Lettergesh beach, where the horse race scene was filmed, "The Quiet Man Bridge", signposted off the N59 road between Maam Cross and Oughterard[ and the "White O'Morn" cottage. The latter is located on R336 south of Maam, but long ago fell into ruin. Read more