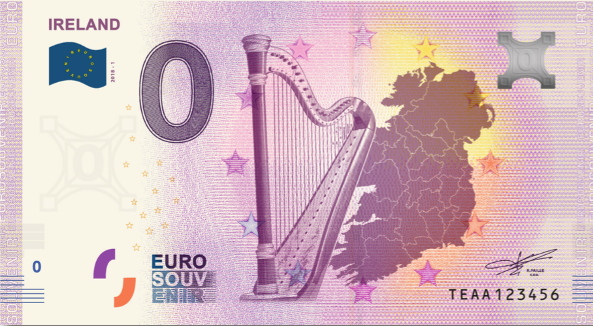 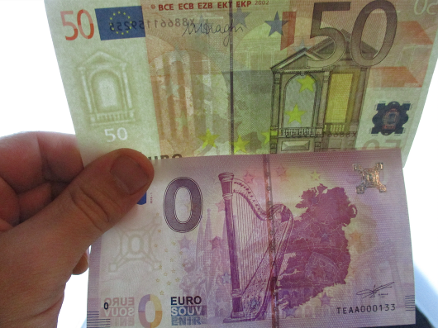 HEADFORD - August 13, 2018 —Euro Note Souvenir, a Galway based company, has launched the first ‘0 Euro’ banknote for Ireland this month. The banknote, also referred to as Euro Souvenir, shows the picture of a Celtic harp and a map of Ireland and its counties, and marks the beginning of the introduction of the Euro Souvenir concept in Ireland as an Irish souvenir or Irish gift.

The Euro Souvenir note looks and feels like a real Euro banknote, and with the Celtic harp and the map of Ireland, one could think of it as an official Irish banknote. The note carries even security features such as watermark, hologram, microprint, security thread and the symbols that appear only under UV light.

The “Euro Souvenir” is a new souvenir or merchandise concept for the tourism sector and visitor attractions. The note can be personalized with a picture of an attraction, event or building, like built heritage, a museum or a zoo, and marketed to visitors and tourists via an ATM-like machine or counter displays.

“All that is needed for the production of the personalized banknote is a photo, an image or drawing of what should appear on it,” says Sara Medwed, Head of customer Service at Euro Note Souvenir.

The ‘0 Euro Souvenir’ concept already exists in eight EU countries. It started in France, where it was invented by French entrepreneur and innovator Richard Faille in 2015, who was successfully dealing with souvenir coins before he invented the 0 Euro banknote. The concept was then carried to Germany, Austria, France, Belgium, Italy Switzerland, Spain and Portugal, where it was very successfully introduced by individual businesses.

Ireland will be one of the next countries to welcome the ‘0 Euro Souvenir’ as an Irish gift, and personalized banknotes with Irish locations can be produced from January 2019 to be ready for the start of the new tourist season. Not only do tourists like this new type of souvenir, but also people who collect the 0 Euro notes as a hobby, like coins or stamps.

“There are in fact large communities of collectors in the other countries who collectively order their required amounts,” says Peter Schneider, the founder of Euro Note Souvenir. “Of the five thousand notes produced in the first batch, almost half of them were sold to collectors even before they were available in the market,” adds Schneider.

The company offers the souvenir banknote with the Celtic harp via their web shop for 4.99 EUR a piece, but also seeks business partners in Ireland, such as souvenir and gift shops interested in selling the souvenir locally.

The ‘0 Euro Souvenir’ banknotes are approved by the European Central Bank (ECB) and printed by Oberthur Fiduciary in Switzerland, which is an official Euro banknote printing partner of the ECB. It takes about 8 weeks to produce a banknote with a new picture, while reorders of an existing banknote take 4 weeks.